Miste di Bruschette
Bruschette are one of the favorites for antipasti in Italy. You can create all kinds of varieties, but I like to keep them simple. Of course the original bruschetta al pomodoro is a must and the combination of bufala and anchovies is just heavenly! Though, if you’re not such a fan of anchovies, still add the bufala and finish with some olive oil, parsley or basil. 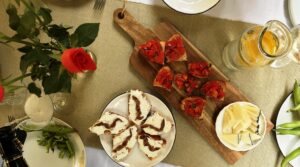 Preparation
For both recipes preheat the oven on 200 degrees or grill the bread in a grill pan, as you prefer.

Then wash and drain the tomatoes. Cut them in half and the halves again in halves or even smaller. Then take a bowl, add a good layer of olive oil, a smashed garlic and some salt. Chop or break the fresh basil leaves and add to the bowl together with the oregano. Add the tomatoes and a pinch of salt to your taste. Mix everything well.

Then for the bruschette, cut thick slices of the bread and cut the slices in half. Cover them with a drizzle of olive oil. On a baking tray leave them in the oven for about 6/8 minutes until browned. Preferably turn them around halfway through, so they’re browned evenly.

Serving
Let the bread cool down just a little before serving, like 2 minutes. Then take some nice plates, cover them with your pomodori mixture and some extra olive oil on top.

For the ones with stracciatella di bufala, take a slice of bread, spread a thick layer of bufala on top and finish with an anchovy. After you can finish with some chopped prasley on top.

TALKS AND DISHES / The Italian Story